American military officials have denounced the ouster of a president in West Africa, and said they had no warning of what their students were planning.,

NAIROBI, Kenya — American Green Berets were training local forces in the West African nation of Guinea last weekend when their charges peeled away for a mission not listed in any military training manual: They mounted a coup.

The Americans knew him well.

A team of about a dozen Green Berets had been in Guinea since mid-July to train about 100 soldiers in a special forces unit led by Colonel Doumbouya, who served for years in the French Foreign Legion, took part in American military exercises and was once a close ally of the president he overthrew.

The United States, like the United Nations and the African Union, has condemned the coup, and the U.S. military has denied having any advance knowledge of it.

For the Pentagon, though, it is an embarrassment. The United States has trained troops in many African nations, largely for counterterrorism programs but also with the broad aim of supporting civilian-led governments.

And although numerous U.S.-trained officers have seized power in their countries — most notably, Gen. Abdel Fattah el-Sisi of Egypt — this is believed to be the first time one has done so in the middle of an American military course.

On Sunday, once the Green Berets realized a coup was underway, they drove straight to the United States Embassy in Conakry, and the training program was suspended, said Kelly Cahalan, a spokeswoman for the U.S. Africa Command. The coup, she said, is “inconsistent with U.S. military training and education.”

American officials seeking to downplay the episode initially stressed that the base where the training took place was in Forecariah, a four-hour drive from the presidential palace, close to Guinea’s border with Sierra Leone. 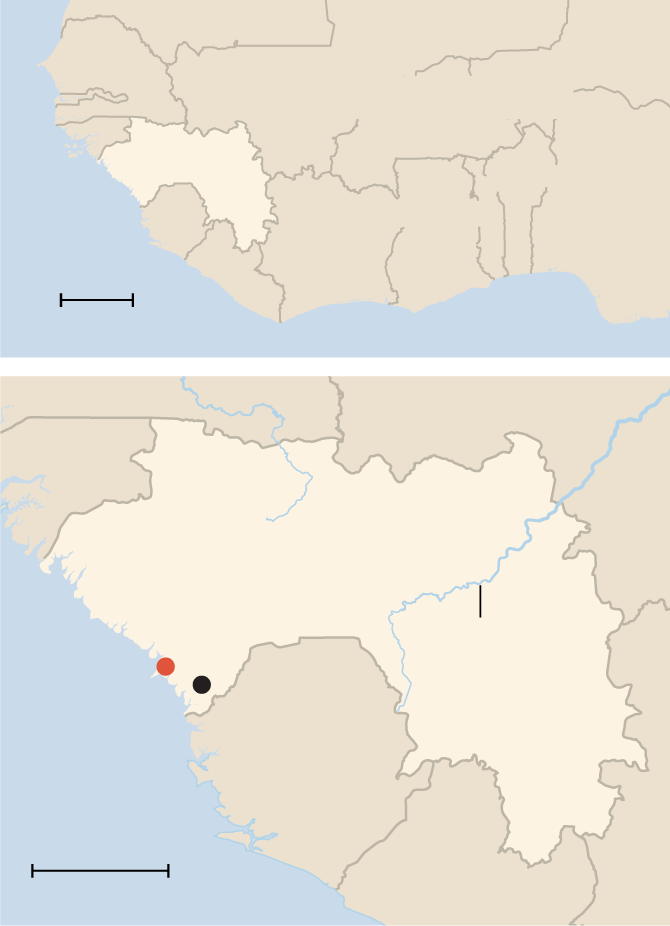 But on Friday, U.S. officials said they were investigating reports that Colonel Doumbouya and his fellow coup-makers had set off in an armed convoy from that same base early on Sunday — raising the prospect that they slipped away while their instructors were sleeping.

“We do not have any information on how the apparent military seizure of power occurred, and had no prior indication of these events,” Bardha S. Azari, also a spokeswoman for the U.S. Africa Command, said in an email.

The coup in Guinea, the fourth military takeover in West Africa in 12 months, following two coups in Mali and a disputed succession in Chad, fueled worries of democratic backsliding in a coup-prone region of Africa.

The discomfort of U.S. officials over their proximity to the coup plotters was made worse by video footage circulating in recent days that showed smiling American military officers in a crowd of joyous Guineans on Sept. 5, the day of the coup.

As a four-wheel-drive vehicle with Guinean soldiers perched on the back pushes through the crowd chanting “Freedom,” one American appears to touch hands with cheering people.

“If the Americans are involved in the putsch, it’s because of their mining interests,” said Diapharou Balde, a teacher in Conakry — a reference to Guinea’s huge deposits of gold, iron ore and bauxite, which is used to make aluminum.

American officials confirmed that the video showed Green Berets returning to the U.S. Embassy on Sunday, but denied it implied support for the coup. “The U.S. government and military are not involved in this apparent military seizure of power in any way,” Ms. Azari, the spokeswoman, said.

For many Guineans, the Americans’ cameo role in the coup was just one element in a week of dizzying change driven by Colonel Doumbouya, 41, now the second-youngest leader of an African state.

The youngest is in neighboring Mali, where Col. Assimi Goita came to power only in May, also following a coup.

After an hourlong gun battle outside the presidential palace on Sunday in which at least 11 people were killed, Guinean and Western officials said, Colonel Doumbouya appeared on state television wearing sunglasses and draped in Guinea’s tricolor flag.

He said he had been forced to seize power because of the actions of President Conde, a one-time democracy campaigner elected president in 2010 after an earlier coup paved the way for elections.

But Mr. Conde’s legitimacy slumped last year after he amended the constitution to enable him to seek a third term, which he won. After the election, over 400 political opponents were cast into Guinea’s squalid prisons, where at least four died, Amnesty International said.

Footage that circulated after the coup showed a disheveled Mr. Conde, surrounded by soldiers, slouched on a sofa and looking dejected. Colonel Doumbouya has refused to say where he is being held, though envoys from West Africa’s main political and economic bloc met with Mr. Conde on Friday and said he was in good health.

The president has been ousted by an officer whose career he once blessed.

Colonel Doumbouya shot to public attention in October 2018 during celebrations for Guinea’s 60th anniversary of independence, when he paraded the country’s newly formed Special Forces unit through central Conakry. Images of the parade went viral on Guinean social media.

“People were very impressed by the choreography of the soldiers, and synchronized movement of their vehicles,” said Issaka K. Souare, director of the Sahel and West Africa program at the Stockholm International Peace Research Institute.

Mr. Conde, in a 2018 interview, lavished praise on the young officer — a fellow member of the Malinke tribe. Colonel Doumbouya, as a French Legionnaire, served in Afghanistan and Ivory Coast and completed a commando training course in Israel, according to his official biography.

Married to a French military police officer, he is also a French citizen and graduated in defense studies from a university in Paris.

Although public disaffection with Mr. Conde laid the ground for the coup, it was also fueled by smoldering rivalries inside Guinea’s defense establishment, a Western official and an analyst, who could not be identified because of the sensitivity of the matter, said.

They said that tensions grew between Colonel Doumbouya and Guinea’s defense minister, Mohamed Diane. Fearing a putsch in the capital, Mr. Diane moved the Special Forces unit to the base in Forecariah.

Colonel Doumbouya complained publicly that his unit was being starved of resources.

American officials have known Colonel Doumbouya since the start of his rise. A photo posted to the U.S. Embassy Facebook page from October 2018 showed him standing with three American military officials outside the U.S. Embassy.

But on Friday American officials said they were puzzled why he would choose to mount a coup at a moment when he was working closely with Americans.

It’s not the first time that coups in Africa have cast a shadow over American training programs on the continent. As insurgents surged across Mali’s northern desert in 2012, United States-trained commanders of the country’s elite army units defected at a critical time, taking troops, trucks, weapons and their newfound skills to the enemy.

U.S. to Place Travel Restrictions on South Africa, Other Countries