A South African Town Lacks Water and Electricity. But Mayors? It Has Two.

LICHTENBURG, South Africa — Walking through what could be the charming tree-lined streets of Lichtenburg in South Africa’s rural heartland, pedestrians skirt around piles of uncollected trash. Shop fronts darkened by electricity blackouts line the main road. A recently built community center has been stolen, brick by brick.

Mayor Daniel Buthelezi believes he can turn the town around. So does Mayor Tsholofelo Moreo.

Two men simultaneously claim to be the mayor of Lichtenburg, a community of about 182,000 people 150 miles west of Johannesburg. Both are members of the African National Congress, or the A.N.C., the party that rules South Africa and this neglected town. 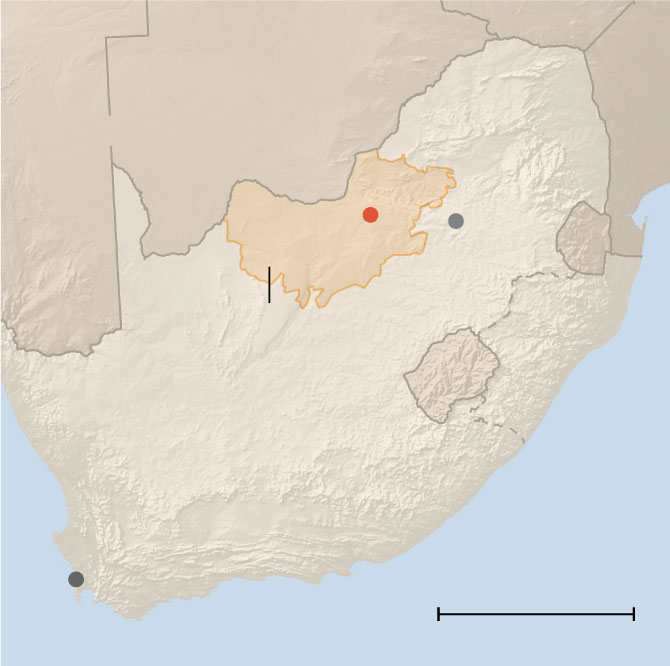 Lichtenburg is only one of dozens of towns across South Africa that have stagnated as politicians in the same party fight one another.

As South Africans go to the polls on Monday to vote for local leaders, the dysfunction in their towns is testing their longstanding loyalty to the A.N.C. — the party of Nelson Mandela, which led the struggle to liberate South Africa from the apartheid regime. With municipalities failing to provide basic services like water, electricity and trash collection, the election has evolved into a national referendum on the A.N.C. government’s chaotic administration and failed promises.

Other towns also find themselves with dueling mayors. Just an hour’s drive southwest, the Tswaing municipality has two mayors from opposing A.N.C. factions. Last year, voters in an impoverished town in KwaZulu-Natal province were also confounded by two mayors — in this case, from the opposition Inkatha Freedom Party.

The battle to control the modest resources of small towns and local wards has at times ended in violence. In the past month, there have been reports of at least four local councilors killed in political infighting.

“The kind of thuggery that has been going on in politics must stop, like yesterday,” said Job Mokgoro, the former premier of North West province, which includes Lichtenburg.

Mr. Mokgoro said he had tried to bring the two A.N.C. factions in Lichtenburg to the negotiating table in 2019, when Mr. Buthelezi, then the sole mayor, was being challenged for the mayoralty by his rival, Mr. Moreo. But Mr. Mokgoro said he was shoved out of the council chamber by angry councilors, an impasse that two years later led both men to claim the mayoralty.

Mr. Mokgoro himself was removed from his position in August by the A.N.C.’s national leaders, after clashes with party factions in the province.

After the fall of apartheid, municipalities were envisioned as the democratic, grass-roots platform to replace the apartheid regime’s centralized control. But this political decentralization has been exploited by corrupt or incompetent politicians, said Kevin Allan, head of Municipal IQ, an independent organization that monitors local government.

“The independence of the sphere has been exploited by local political factions,” and by corrupt individuals, creating “personal fiefdoms which overlap with regional political structures,” Mr. Allan said in a written comment to The New York Times.

Nearly two-thirds of South Africa’s municipalities are in financial distress, and more than one-third have adopted budgets they cannot fund, said Tito Mboweni, the country’s former finance minister, in his budget speech earlier this year. Many are unable to collect taxes or revenue for services rendered because their residents are too poor, or too angry to pay for nothing.

Municipal IQ has flagged Lichtenburg as one of the poorest performing municipalities in the country. It owes 600 million rand (about $39.5 million) in unpaid electric bills, and is reliant on grants from the national and provincial governments for basic services, like the town library.

The two mayors, however, have had little opportunity to find solutions, as their rivalry has resulted in disrupted meetings, and even chairs thrown across council chambers. In the mayor’s office, the wooden plaque with gold letters listing each mayor since the town’s founding has been vandalized.

Mr. Buthelezi, a 63-year-old school principal, said in an interview that he has been too afraid to enter the mayor’s office since February, when he was met by a group of burly private security guards who barred his entry.

“I cannot go there alone,” said Mr. Buthelezi. “They hired people so that when they see me there, I should be assaulted, be harassed, or other things be done that would not be good.”

Mr. Buthelezi was ousted as mayor in a vote of no-confidence by the town council last December, but he challenged the vote’s legality in court and was reinstated the next month. In the meantime, though, his rival Mr. Moreo had been sworn in as the new mayor. Mr. Buthelezi has appealed to the A.N.C.’s national leaders to resolve the matter.

Still, the mayoral car — a low-slung Mercedes-Benz that seems unsuitable for the town’s potholed roads — is parked in Mr. Buthelezi’s garage.

Mr. Moreo is in his mid-30s, a spokesman said, and started his career in government as the personal assistant to a previous mayor. Mr. Moreo did not appear for a scheduled interview earlier this month, and was later unavailable to speak by phone.

Their clash received national attention when South Africa’s largest dairy producer, Clover, announced in June that it would shut down its cheese factory in Lichtenburg and relocate to a town with more reliable services.

These provincial embarrassments have tarnished the A.N.C.’s national image. In a bid to restore voters’ trust, President Cyril Ramaphosa, who is not up for election on Monday, has become the face of the party’s local campaign. In Lichtenburg, neither mayor is featured on campaign posters, though Mr. Moreo is on the ballot. Mr. Buthelezi is not — but said he is asking the A.N.C. to reinstate him as mayor anyway.

Instead, it is Mr. Ramaphosa’s face beaming from campaign posters at residents, imploring them to give the A.N.C another chance.

“It’s just Ramaphosa all over. It’s as if Ramaphosa is running for mayor,” said Susan Booysen, head of research at the Mapungubwe Institute for Strategic Reflection in Johannesburg.

Mr. Ramaphosa’s party is betting on polling that shows he is more popular than the A.N.C., Ms. Booysen said.

When selecting local councilors, however, the A.N.C. has employed a “delicate and sometimes disastrous recruitment process,” she adds.

To expand its base, the party appoints its allies to appease political players, Ms. Booysen said. That has allowed for patronage and poor service, particularly in municipalities that don’t receive national attention.

Still, this record does not necessarily dissuade voters. In focus groups, Ms. Booysen found that voters see the A.N.C. as family, and the family provider, and are therefore forgiving of its shortcomings.

Voters were more likely to trust the A.N.C. over the largely untested opposition parties, according to research from the University of Johannesburg. And many voters benefiting from social assistance said they feared that their aid could be taken away if another party came to power.

Mr. Ramaphosa’s frequent refrain on the campaign trail is that family “sticks together.” He reminds them about the houses, schools and other infrastructure the A.N.C. government has provided since the end of apartheid.

Outside the Lichtenburg post office, Matshogo Magwatane, a 32-year-old father of two, had been waiting in line since dawn one recent day for a monthly pandemic relief grant of 350 rand (about $24).

Mr. Magwatane lost a local government job, which he blames on nepotism. He turned to selling kebabs and chicken feet on a street corner, until the piles of litter made street food a health hazard.

He describes the ruling party as a pit of snakes biting one another. Still, he said, he will vote for the A.N.C. in Monday’s election.

“I’m going to go with the snake that will win,” Mr. Magwatane said.