Two demonstrators were fatally shot, a doctors’ group said, as crowds answered activists’ call for a “march of millions” against a coup that has threatened the country’s democratic transition.,

Protesters flooded the streets in defiance of a military coup that derailed the nation’s transition to civilian rule. Two people were fatally shot and more than 100 injured in the demonstrations on Saturday. 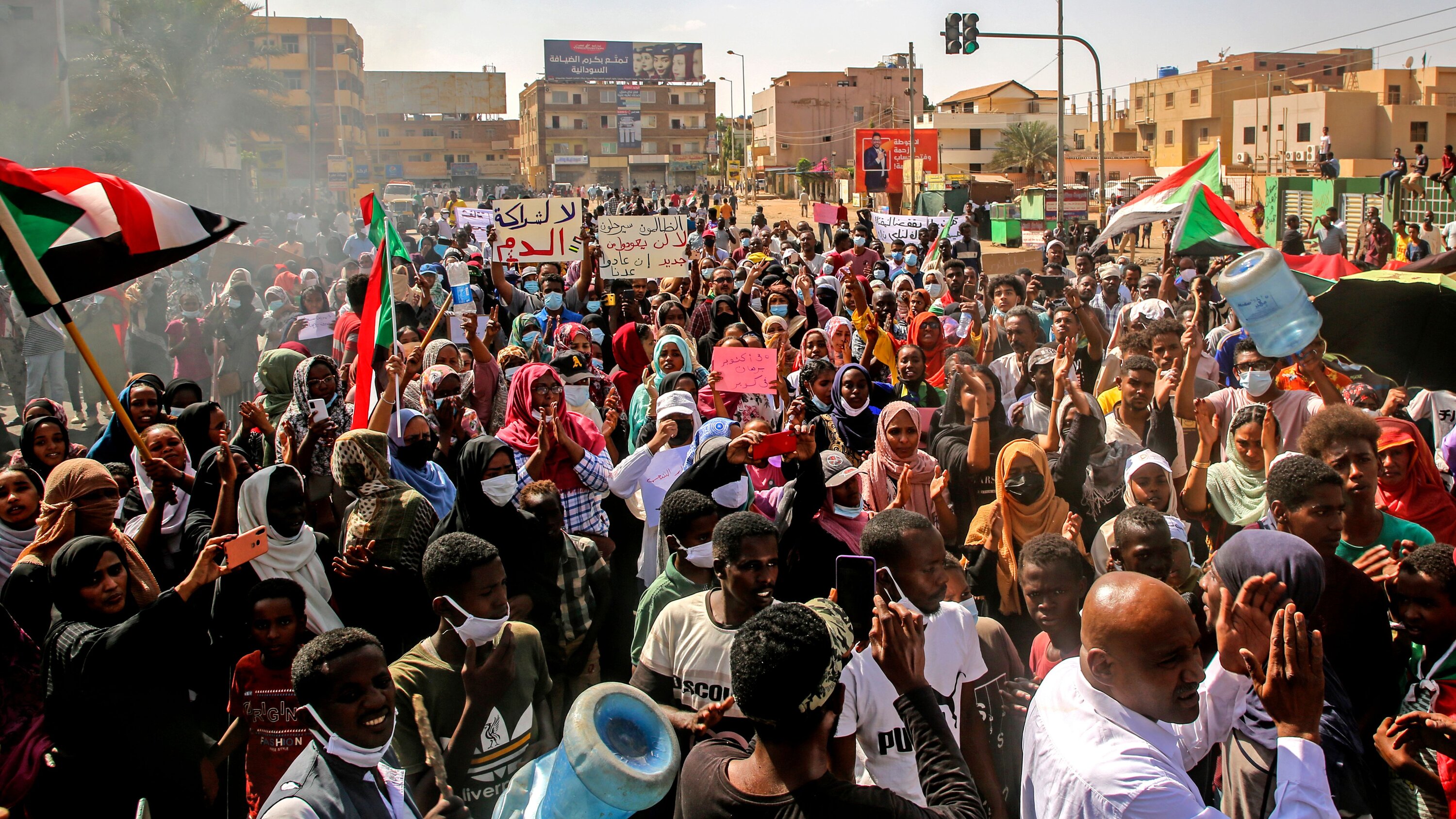 Protesters flooded the streets in defiance of a military coup that derailed the nation’s transition to civilian rule. Two people were fatally shot and more than 100 injured in the demonstrations on Saturday.CreditCredit…EPA, via Shutterstock

NAIROBI, Kenya — Two people were killed and more than 100 were injured in Sudan as protesters flooded the streets on Saturday, a doctors’ group said, as pro-democracy crowds defied the military coup this week that ushered in a new era of uncertainty for one of Africa’s largest countries.

Activists called for a “march of millions” days after Lt. Gen. Abdel Fattah al-Burhan, the military chief, dissolved the joint civilian-military government that took shape after the 2019 ouster of Omar Hassan al-Bashir, Sudan’s longtime dictator. On Monday, General al-Burhan ordered the arrests of the prime minister and other top civilian leaders, imposed a nationwide state of emergency and said the military would establish a new government. He promised elections in July 2023.

The moves led to widespread demonstrations through the week, as protesters in the capital, Khartoum, and other Sudanese towns and cities called for a return to civilian rule. Security forces responded with violence, killing at least seven people before Saturday’s demonstrations and injuring 170 others, according to the pro-democracy Central Committee of Sudanese Doctors. Professional and trade unions called for civil disobedience, many banks, schools and shops closed their doors and many federal and state government workers stayed home.

Sudan’s military has a history of bloody crackdowns, and analysts said the protests on Saturday, and the security forces’ response to them, would be a test of the military’s willingness to turn a page. Many Sudanese vividly remember June 3, 2019, when security forces violently dispersed protests in the capital, raping and killing dozens of people and dumping some of the bodies in the Nile.

“The military is promising to build a democratic, civilian state while stepping over the bodies of dead innocent people,” said Dr. Sara Abdelgalil, spokeswoman for the Sudanese Professionals Association, a pro-democracy coalition of trade unions. “We cannot allow this military takeover to become a successful story.”

The doctors’ group said in a Facebook post that two people had been killed in Omdurman, the twin city of Khartoum. Security forces there fired live bullets on protesters, the doctors’ group said, hitting one in the head and the other in the stomach. The group also reported dozens of injuries in Bahri city near the capital and in Gedaref state in the east. Demonstrations continued into the night, with protesters still marching in the streets as apprehension grew.

The deaths and injuries came despite repeated calls by American and United Nations officials for peaceful protests to be permitted.

On Friday night, the United Nations special envoy for Sudan met with Gen. Mohamed Hamdan, known as Hemeti, who leads the dreaded paramilitary Rapid Support Forces that played a role in the latest coup. The envoy, Volker Perthes, said on Twitter that he emphasized to the general the need to “avoid any confrontation” with protesters.

The U.S. special envoy to the Horn of Africa, Jeffrey Feltman, said he had spoken with General al-Burhan and other top officials on Friday and warned against a violent response to the planned rallies.

“The Sudanese people must be allowed to protest peacefully this weekend, and the United States will be watching closely,” Mr. Feltman’s office tweeted.

Secretary of State Antony J. Blinken reinforced that message. “The United States continues to stand with Sudan’s people in their nonviolent struggle for democracy,” he tweeted. “Sudan’s security forces must respect human rights; any violence against peaceful demonstrators is unacceptable.”

Some within Sudan’s military have been surprised by the degree of public resistance to the coup, and rivalries among the generals are beginning to emerge, said Ed Hobey-Hamsher, the senior Africa analyst at Verisk Maplecroft, a global risk intelligence company based in Britain.

“The fate of the coup still hangs in the balance,” he said.

Pro-democracy groups have rejected the possibility of recognizing or negotiating with a military government, instead demanding the release of all civilian leaders, including Prime Minister Abdalla Hamdok, who is now under house arrest. The U.N. envoy, Mr. Perthes, said in a statement that he was in contact with all sides and was trying to mediate “toward a peaceful solution to the current crisis.”

Speaking to Al Jazeera television on Saturday, Mariam al-Sadiq al-Mahdi, the foreign minister of the now-dissolved Sudanese government, said the military must respect the democratic yearnings of the Sudanese people. She said she remained concerned about the welfare of Mr. Hamdok.

Tensions over the possibility of a coup had been brewing for months, as civilian groups accused the military of wanting to cling to power and resisting efforts to hold commanders accountable for corruption and human rights atrocities under Mr. al-Bashir, the ousted dictator.

Amid a nationwide internet blackout on Saturday, protesters carrying Sudanese flags gathered at noon in neighborhoods in Khartoum and Omdurman before marching to major streets and bus stations.

Demonstrators could be heard chanting, “The people are stronger and the revolution will continue.” Others carried banners reading, “No to military rule.”

Security remained tight around the military headquarters in the capital, with main bridges closed and the road to the airport blocked at one point, according to witnesses.

In El Fasher, a town in the North Darfur region in northwestern Sudan, the army closed the market and sent people home, according to an aid official who spoke on the condition of anonymity to minimize any potential risk to his organization’s operations.

The cities of Geneina in West Darfur and Gedaref in the east also had a heavy military and police presence, the official said. In some cities, military officers cleared blockades of bricks, slabs and tree branches that protesters had placed across roads to stop them from gaining access to neighborhoods.

On Saturday, protests took place not only in Sudan but in cities around the world with substantial Sudanese populations. Demonstrators against the coup took to the streets in Australia, Indonesia, Italy, Lebanon, Norway and the United States.

“We have been in shock about what’s been happening in Sudan,” Elhussein Yasin, a board member of the Sudanese Diaspora Roundtable in Britain, said by telephone. He said protesters had come out in major British cities including London and Birmingham to urge British lawmakers to press the Sudanese generals to give up power.

“We are protesting to say no to a military coup and yes to democracy,” Mr. Yasin said.

The coup and the ensuing protests are the latest signs of instability in the northeast African nation, which has been hobbled by rising economic hardships, the coronavirus pandemic and shortages of medicine and fuel. This week, the United States froze $700 million in direct assistance to Sudan’s government, the World Bank suspended all disbursements to the country and the European Union threatened to follow suit.

The African Union suspended Sudan, and the generals have been condemned by leaders and governments around the world. President Biden said he “admired the courage of the Sudanese people in demanding their voices be heard.”

On Friday, Amnesty International called on Sudanese generals to investigate the killings of protesters earlier in the week and to prosecute those involved.

Deprose Muchena, Amnesty International’s regional director for east and southern Africa, said the military leaders “must make no mistake about it: The world is watching and will not tolerate further bloodshed.”