Nigeria Building Collapse Kills at Least 5 With Many More Trapped

As many as 100 workers were feared trapped at a construction site in Lagos, where building collapses are common, with contractors using shoddy materials and regulations often not enforced.,

At Least 5 People Are Dead in Nigeria Building Collapse

The 21-story apartment building was under construction when it crumbled in Lagos, Nigeria, killing at least five people. Many more people are feared to be trapped under the rubble. 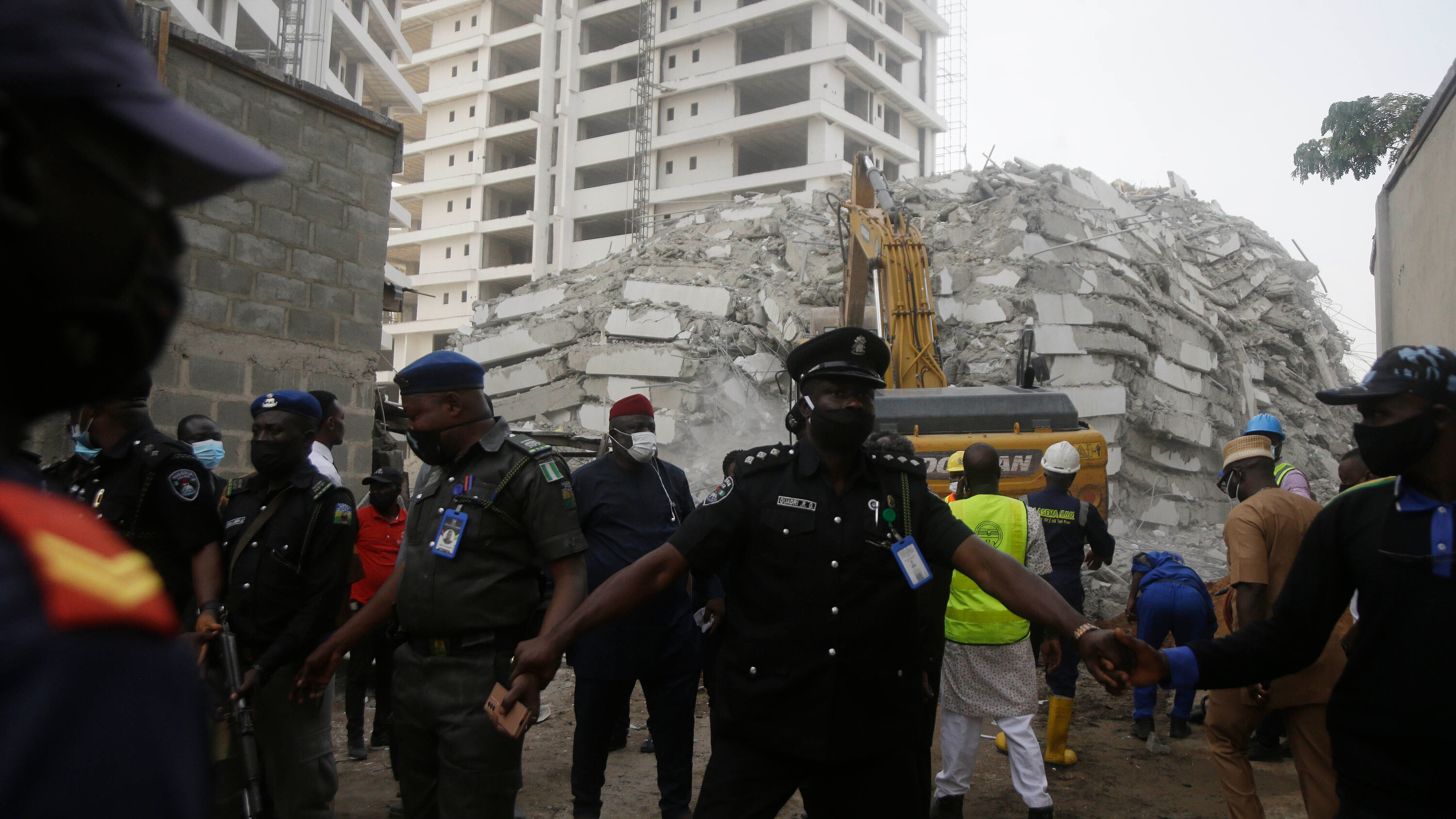 The 21-story apartment building was under construction when it crumbled in Lagos, Nigeria, killing at least five people. Many more people are feared to be trapped under the rubble.CreditCredit…Sunday Alamba/Associated Press

NAIROBI, Kenya — A 21-story building under construction crumbled on Monday in Lagos, Nigeria’s financial capital and Africa’s largest city, leaving what workers said were as many as 100 construction workers trapped and at least five dead in the latest structural failure in a rapidly expanding metropolis.

The collapse occurred at about 2 p.m. in the upscale neighborhood of Ikoyi — where construction is booming — in a country where building materials are often of poor quality and construction standards are poorly enforced, according to experts.

Four people have so far been rescued from the site, according to Ibrahim Farinloye, the coordinator of the National Emergency Management Agency in Lagos State.

Many more people were feared to be trapped inside the rubble. Two workers at the scene told Reuters that 100 people were likely working at the site when the building gave way.

The scene was a replay of the structural collapses that have happened multiple times in recent years in Lagos, Nigeria’s financial hub. Experts have pointed to poor design, shoddy materials and the lack of or insufficient monitoring by inspectors as the leading causes of the accidents.

In the Ikoyi neighborhood on Monday, video posted on social media and aired by local news media showed that the building’s floors had collapsed onto one another like a many-layered sandwich.

Crowds immediately gathered to try and dig through the rubble by hand. Many angry residents congregated at the debris site, some crying, others clenching their fists in frustration over the sluggish response by authorities.

“Literally saw my life before me,” Muhammad Tukur, an eyewitness in a nearby building, said in a post on Twitter. “I don’t think I’d be alive to tweet this if it were the one closer to our window. Our office was vibrating as the building was collapsing.”

As rescue efforts continued into the evening, officials said they had dispatched emergency responders to the scene. Mr. Farinloye said authorities were trying to speed up the rescue operations.

“We are moving in the military to take over operations because it is beyond the capacity of the civil operators,” he said.

Olufemi Damilola Oke-Osanyintolu, the director general of the Lagos State Emergency Management Agency, said in a Facebook statement: “All first responders are at the scene while the heavy duty equipment and life detection equipment have been dispatched.”

In 2019, a building in Lagos housing a school for children collapsed, killing at least 20 people, according to officials. In 2016, at least 34 people were killed in the Lekki district in Lagos State when a building under construction collapsed. In 2013, at least seven were killed after a three-story building in the low-income Ebute Meta neighborhood in Lagos collapsed.

Spy Tool Was Deployed in State-Sponsored Hack of Ugandans

Congo Ousts Mining Leader in a Cloud of Corruption Claims