Atrocities on All Sides in Ethiopia’s War, U.N. Says as Rebels Advance

The United Nations report, released during a state of emergency as rebel forces near the capital, was written under significant constraints imposed by the government.,

NAIROBI, Kenya — As the conflict in Ethiopia stretches into its second year and Africa’s second most populous nation continues to fracture, a report by the top U.N. human rights body released on Wednesday offered evidence that all sides in the war had committed gross human rights violations, including killings of civilians, sexual violence and attacks on refugees.

But the report, written in conjunction with an Ethiopian government human rights body, was written under significant constraints that included restrictions on visits to sites where serious violations were said to have occurred. Investigators stopped short of saying which had side committed the most atrocities even as they presented a grim portrait of an atrocity-laden war.

“A number of these violations may amount to crimes against humanity and war crimes,” the report found, pointing to “appalling levels of brutality” in acts of sexual violence frequently intended to “degrade and dehumanize an entire ethnic group.”

In a wide range of interviews, witnesses described a litany of horrors that unfolded in the background of the war, which started in November 2020 when a simmering political feud between Prime Minister Abiy Ahmed and Tigrayan leaders erupted into violence.

A woman abducted from a bus said she was gang raped over 11 days by 23 Eritrean troops who left her for dead. Tigrayan fighters are documented as having killed 200 ethnic Amhara civilians, many with axes and machetes, over two days in western Tigray.

Days later, witnesses said, the Amhara fighters carried out revenge killings. At least 600 Tigrayan men were paraded naked through a village by Eritrean troops who mocked and photographed them, interviewees said. Tigrayan soldiers instructed doctors to cast wounded Ethiopian soldiers on the street. “Throw out the donkeys,” they said.

Coming a day after the Ethiopian government declared a countrywide state of emergency, as Tigrayan rebels advance south toward the capital, the U.N. report highlighted the widespread atrocities that have become a feature of the conflict, but also the difficulties in gaining access to give a full picture of what has happened. 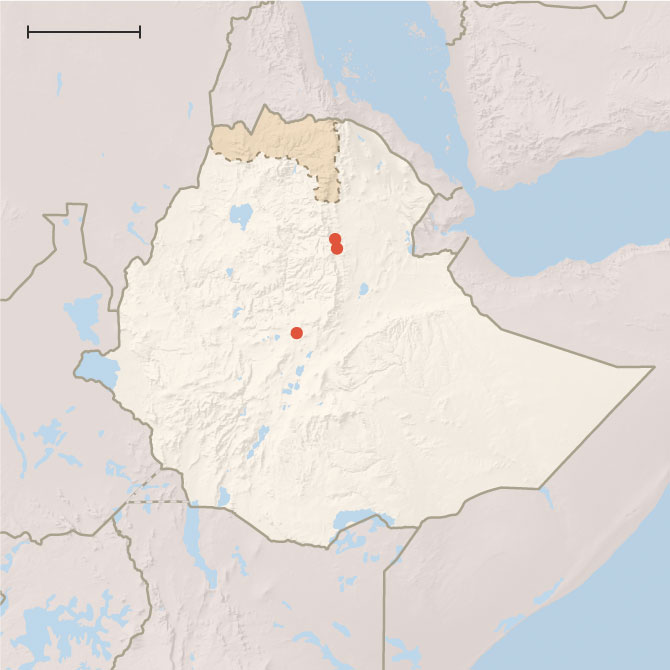 Presenting the report in Geneva, the U.N. human rights chief, Michelle Bachelet, denied her team had been swayed by the Ethiopian government, whose federal human rights body jointly investigated and wrote the report.

But she also acknowledged that the investigation was hampered by intimidation, harassment and restrictions that prevented officials from visiting sites of what rights groups say may be some of the worst atrocities of the conflict.

Ms. Bachelet noted that a U.N. human rights officer who helped to compile the report was among seven U.N. officials expelled from Ethiopia last month, on accusations of “meddling in internal affairs” — a charge that she strongly denied.

The report declined to pass judgment on an Ethiopian government blockade of Tigray, where 5.2 million people urgently need help and at least 400,000 are in famine-like conditions. Other U.N. officials have likened the blockade, which has resulted in just 15 percent of needed trucks entering Tigray since July, to the use of starvation as a weapon of war.

Reports from aid workers, diplomats and witnesses have pointed to widespread rights abuses in Tigray since the war erupted in November 2020, including gang rape, massacres and ethnic cleansing, largely at the hands of Ethiopian and allied Eritrean troops, and allied ethnic militias from the Amhara region.

The U.N. report documents some of those atrocities while also highlighting potential war crimes by Tigrayan forces and allied militias.

These include civilian deaths from indiscriminate Tigrayan shelling in the early days of the war; a massacre of at least 200 Amhara civilians in the town of Mai Kadra on Nov. 9; and sexual assaults on the wives of Ethiopian soldiers.

The report does not quantify the scale or proportion of atrocities committed by either side — in other words, who bore greater blame — although during the press briefing Ms. Bachelet did point to Eritrean and Ethiopian troops.

“In the period covered by the report, I would say that the big number of violations of human rights are linked to the Ethiopian and Eritrean defense forces,” she said. “But we have seen there has been huge allegations of abuses by Tigrayan forces that continues until today.”

The United Nations investigated and wrote the report in conjunction with the Ethiopian Human Rights Commission — a necessary compromise, the U.N. said, in order to gain access to Tigray during a major conflict.

The Ethiopian body is led by Daniel Bekele, a former political prisoner in Ethiopia who later ran the Africa division at Human Rights Watch between 2011 and 2016.

Officials at Human Rights Watch and Amnesty International said they would issue a response to the joint report later on Wednesday.

Several Western diplomats familiar with the work of the U.N.-led investigation acknowledged it had been hampered by its limitations, including some imposed by the Ethiopian government. But they noted that, as the only official account so far of abuses during the war, it could lay the foundations for prosecutions of those responsible for abuses.